Voyage into the imagination of Piranesi

I remember, when only about four years old, being invited to my Swiss neighbor’s house to play. They were my first contact with people of foreign lands. My friend was a blond boy of about my age. I remember dearly his mother, a kind and gentle tall Teutonic woman that greeted my brother and I when we knocked at their door. 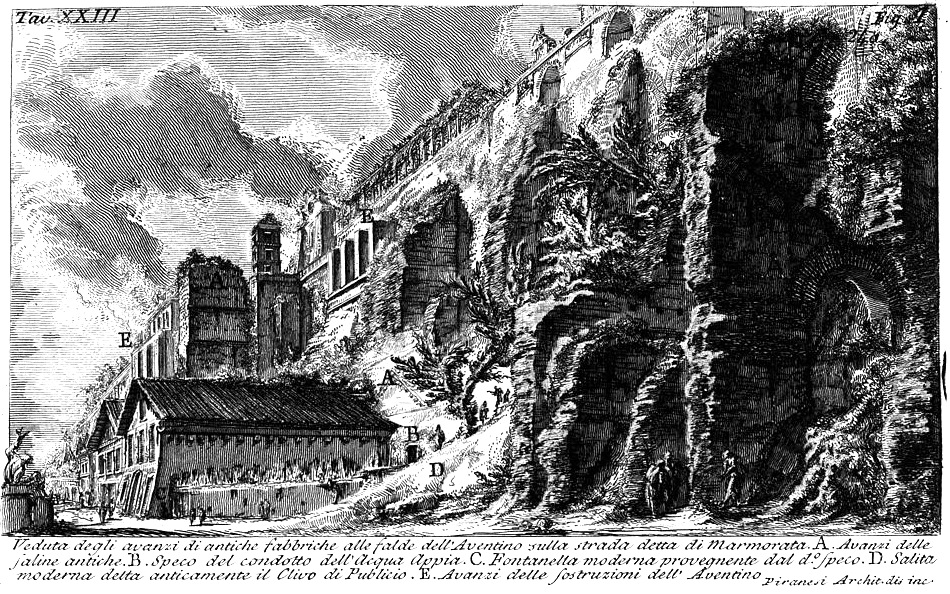 Their house was next to hours, but it was very different. Our house was large enough to accommodate two separate families; we lived on the second floor. Their house was built as a Swiss chalet, with exposed wooden beams. My friend Stoffy and her sister Suzy played with my brother and I. One activity has been etched in my memory, that of finger painting. Once after finishing our paintings, Stoffy’s mother celebrated my painting, saying that it was very nice. Taking my painting home, I showed it to my parents. My father and mother viewed my painting and praised it as well, mentioning that I may have some artistic aptitude.

This is one my earliest recollection of being praised for doing something artistic. This might have happened before, but having a neighbor, then my parents praise me, was memorable. My father went even further, saying that he would invite a cousin of his that was a painter, to critique my painting. Weeks later, my uncle Raul, came for lunch, and indeed, he viewed my painting, and after some time, he also praised my work explaining it in artistic terms.

I understood that I had done something worthwhile. These words impacted me they were like water to the thirsty earth, percolating down and reaching the seeds that will later break its surface, finally producing life above ground. Since then, and thanks to this positive reinforcement, I have enjoyed the plastic arts. I wanted to study architecture, but could not master the mathematical aspect of it, and eventually joined the graphic artists community. 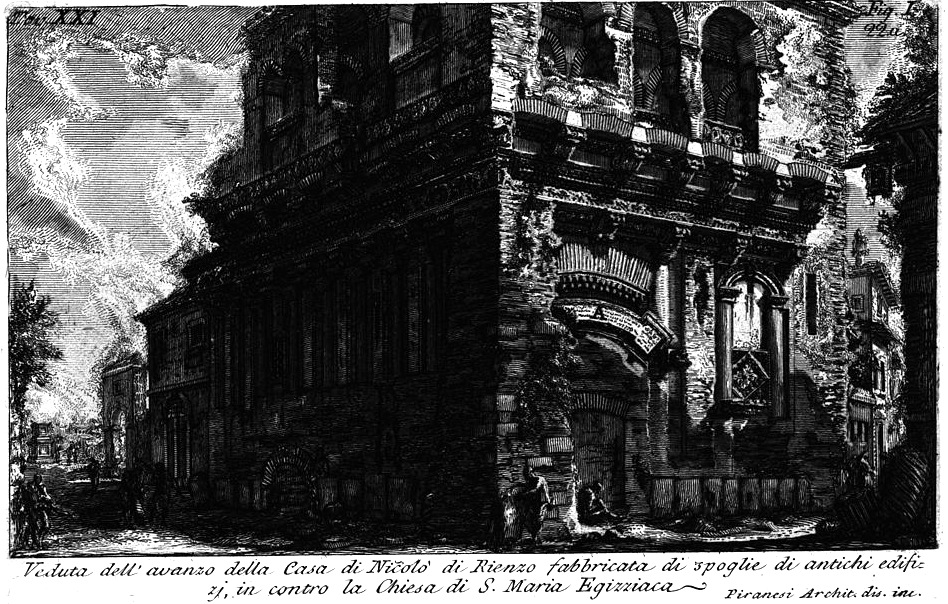 Years later, in college I studied history of architecture with a professor that was a painter. His slide show presentations to illustrate and explain architecture from the Parthenon to the Empire State Building, were fascinating and in my view technologically avant-garde. The classroom was set up as a small amphitheater; a large projection screen presented the slides of these great marvels of human creativity and engineering. He sat on a stool in front of a podium that with a small lamp illuminated his notes.

I could not wait to be back in class again. It was twice a week for one hour and a half. The textbook for it was hardbound book that resembled a coffee table book with many pages with beautiful reproductions of outstanding buildings from foreign lands. I dreamt of travelling to admire such art by paging through its pages.

I also remember dearly this class, not only for what I learned, the excellence of my professor, the technological advances, but because, since I enjoyed it so much, I did very well in it. It might have been the visual approach to presenting the class, and or the combination of elements that allowed me to become noticed by my professor as a student that was very enthusiastic about the subject. This created a bond between us.

I took this course while studying architecture, the class was held in the Art Department. This was my only reason to visit this building. After some weeks, I started becoming more accustomed to this new environment. Students looked different, they seemed to choose individuality and in their effort to appear unique, they stood out from the rest of the student body. Their art was everywhere on display.

I had not been exposed to this type of life before; mine had been more of a pedestrian nature, sports, girls, etc. This was different. Since I enjoyed so much that class, I decided to look into the field of plastic arts. I took drawing, painting, sculpture and printmaking. The later being the area that interested me most. I noticed that I did not feel comfortable using color, painting was a struggle. I could draw well, but trying to add paint was hard. By default, I discovered the line, such as, black and white line drawing, eventually stumbling into etchings. This art method dating back to the mid 1400s. 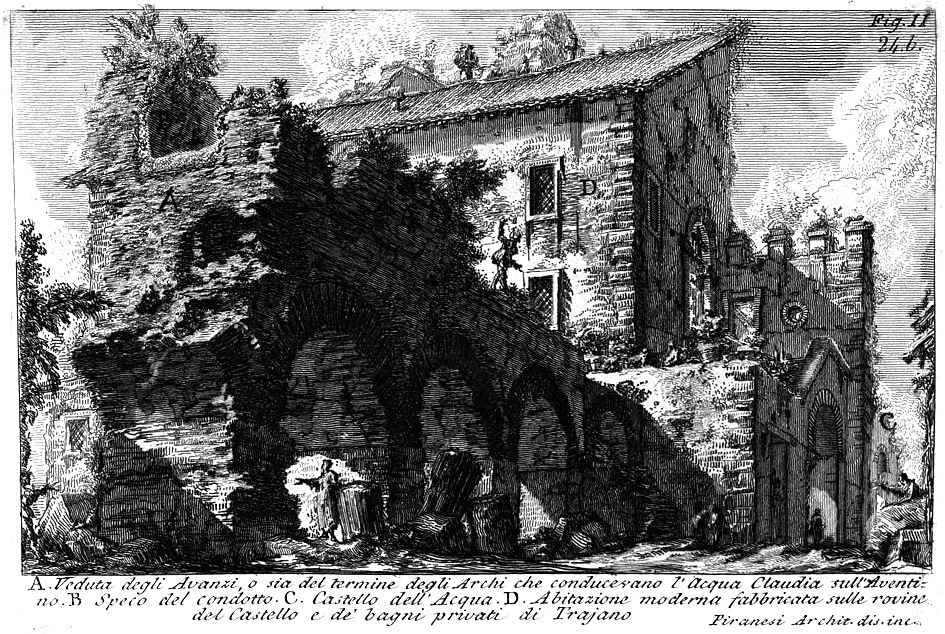 In etching, a metal plate is covered with a waxy ground, which is resistant to acid. The artist scratches off the ground with a pointed etching needle where he wants a line to appear in the finished piece, exposing the bare metal. The plate is dipped in a bath of acid. The acid “bites” into the metal, where it is exposed, leaving behind lines sunk into the plate. The remaining ground is then cleaned off the plate. The plate is inked all over, and then the ink wiped off the surface, leaving only the ink in the etched lines. The plate is then put through a printing press together with a sheet of paper. The paper picks up the ink from the etched lines, making a print.

I found that some of the greatest old masters had produced etchings as well as other types of art. Most notably, Rembrandt, Goya, Durer, Dali and Picasso. In my search for the ultimate etching artist, I stumble upon the works of a Venetian artist named Giovanni Battista Piranesi, (4 October 1720 – 9 November 1778) who was famous for his etchings.

Piranesi embodied for me, not only the art of etchings, but also the art of architecture, being an architect by profession. Between 1748–1774 he created a long series of views of Rome or Vedute, which established his fame. In 1750 he published his Imaginary Prisons or Carceri d’invenzione, a series of 16 prints that show enormous subterranean vaults with stairs and mighty machines.

Piranesi’s work enchanted and transported me. Their dark and sinister quality reminded me of my dreams, the expansive vistas with enormous edifications added to my sense of insignificance. I did not know this then, but it has become evident to me now. 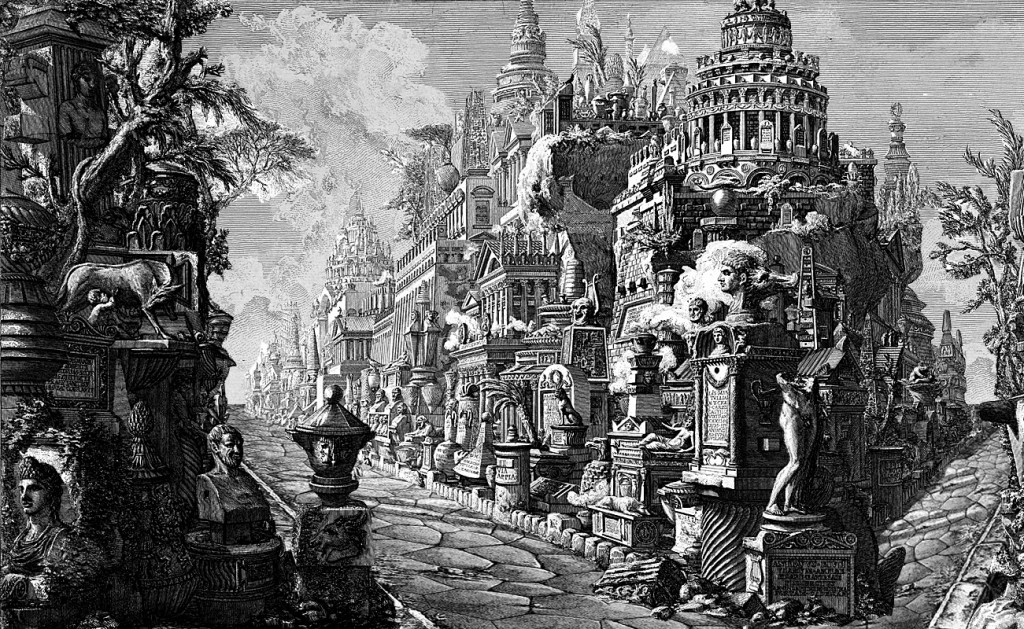 One Response to Roma, città eterna