A dream of awakening

Another dream yet again. Above a Flash animation illustrating it.

Walking one chilly morning with a friend, I found myself in an old European town. The rays of sun could be seen caressing the tips of the buildings, under a clear and light blue sky. The streets were narrow and devoid of color, the dark gray of the cobblestone used on the road, almost matched by the large stones used on the sidewalks, and complemented by a slightly lighter and pinkish stone used on all buildings. The ground showed signs of an overnight rain, since it was wet.

We had been walking for a while, and all the streets looked alike to me, this gave a sense that I did not know this town, and the narrow streets gave me a feeling of being pressured by the buildings around us. We had not spoken a word to each other; we were at the middle of a street block, and walking in the direction of what appeared to be a clearing. I was at least half a step behind my friend. He was leading me, and it was reassuring that I was a follower and not the leader for a change. It was obvious that he knew were we where going. 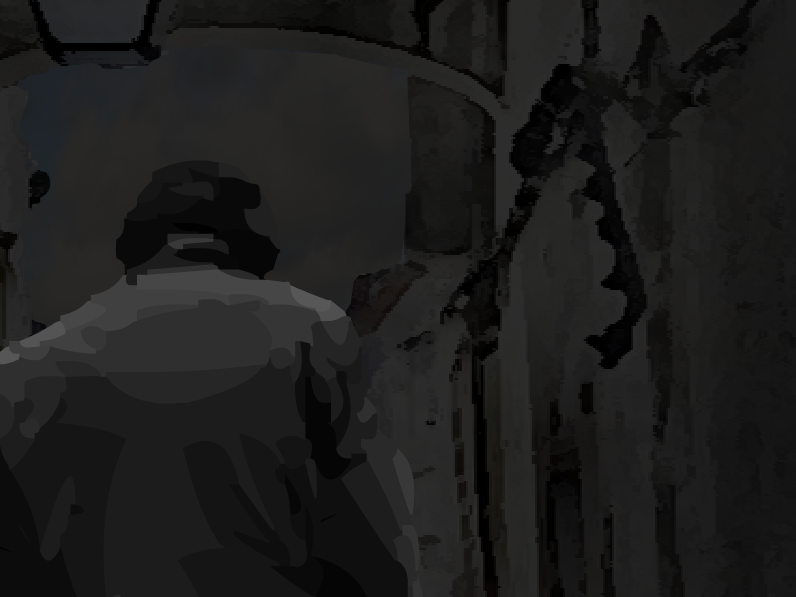 Waking down the street

As we reached the clearing, I noticed a small triangular plaza formed by the convergence of two roads that merged into one that left on one of the corners of the plaza. It was again a symphony of cold stone grays, made more apparent by the chill of a wet early spring morning. My friend communicated to me that he was going to see if he could find his friend at the café in the middle of the block that faced the plaza that did not have a road in front of it.

I looked at my friend walk away towards the entrance of the café, it was the only open door, all other facing entrances were shut, and they seemed uninviting. In front of the café, were a couple of tables with chairs atop them, the entrance had the usual hanging string with beads to keep the insects away. I saw him disappear through the entrance; I was standing in the middle of the empty plaza. 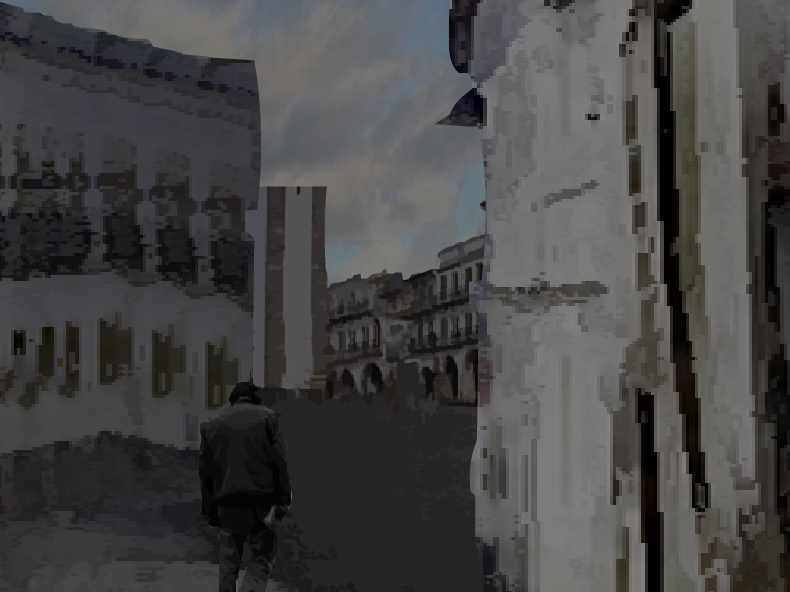 I looked around the plaza, and saw a vintage black European car with its trunk open on the other side of the plaza, I decided to investigate. I walked towards it, reaching it I noticed a man tinkering with the rear of the car. I approached and decided to sit down on the curve a couple of feet away from the tinkering man, I figured that at least I could be entertained watching him while I waited for the return of my friend.As I sat down, I felt the cold from the damp curve and even more intense cold on my left heel. I looked into why, and realized that the heel of my left sock had gotten wet when I had placed my stretched left leg on a small puddle on the ground. This made me notice that I was wearing clogs. I was engrossed in my small misery, and noticed that there was a young oriental looking girl seated cross-legged on the other side of the car writing on a notebook. 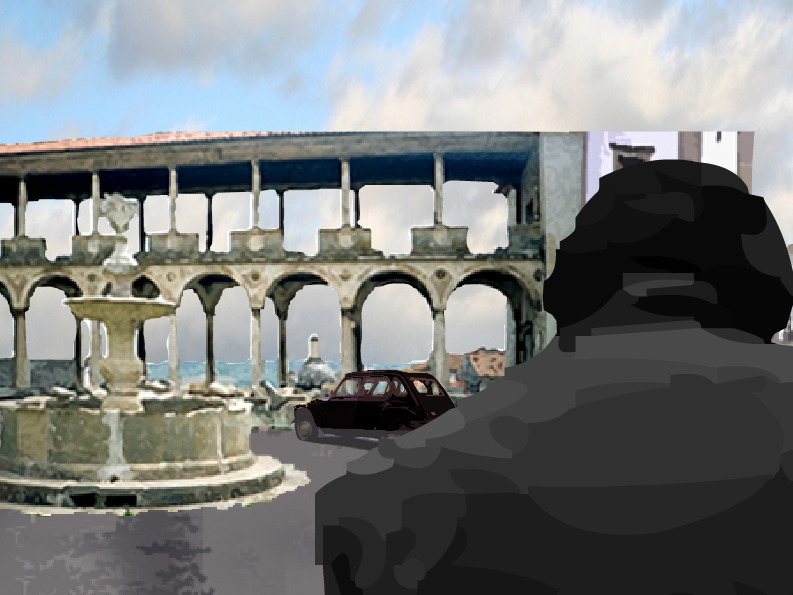 As I was looking at her to get a better sense of her, she uttered the word “Angelo” with surprise and happiness. She appeared to be looking at me or in my direction. I felt as if she was taking to someone that was just behind me. Then she got up in a flash and run in my direction, I felt as if she had walked over me, or to be more exact, as if she had walked into me. It was a very strange feeling, I had never felt that way, and did not even reacted to turn around to see who this Angelo was or where the young girl had gone.

The tinkering man had witnessed the event, he looked at me and gave me a warm smile, I felt at ease with him, and had a feeling that he was not surprised by it. I asked, “Who is Angelo” he replied, “the most beautiful person I know”. It seemed a strange way of referring to another man, I was not used to hearing men talk to other men in that way. I started thinking that this tinkering man might be gay, or something else was happening. “Yes, it could just be a man not afraid of expressing himself in that way.

The girl is hiding

I felt good to find this kind of openness. The man kept looking at me while I took a moment to digest his words; his smile seemed genuine and had a haunting flavor. I was starting to notice that my presence was agreeable to him. He got up and came closer to me. His body language was not threatening, on the contrary I felt as if he was either going to hug me, or was expecting me to hug him.

The entire experience was foreign and magical. All of a sudden the young girl appeared seated on the curve to my left, she was very close to me, her body pressing against my left arm. She said “I could go home with you, cook and wash for you” then she used her left hand to pull my glasses from my face. As she did, I saw through the lenses and could notice that they were tinted in blue. This showed my surroundings in a warmer light. I was surprised, since I was unaware that I had blue tinted glasses on, and that my perception of my visual experience to that moment had been colored by the blue tinted glasses.

I had to considered the young girl’s offerings, they seemed unusual, and maybe she needed money or a place to stay and was willing to about anything for it. While I was deep in thought the tinkering man began to talking to me, he said “don’t mind her, she is a good girl, and she is in love”. I responded “I am glad that she is in love, but why would she offer these things to me, we have just met”. He responded “that maybe true, but she has found something in you that only she can see, and you cannot change that”. 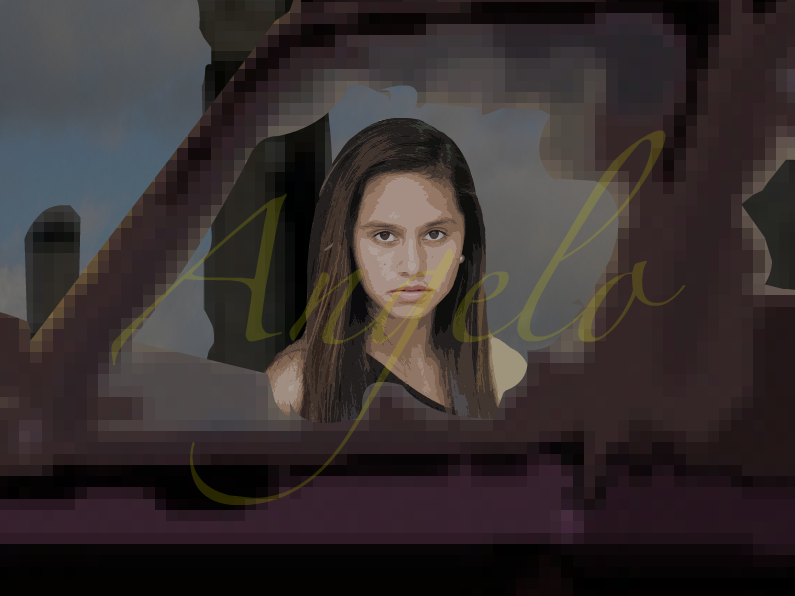 The girls calls out to him

“That may be so” I said “but I do not know what it is”. He replied, “You may ask her if you want, she maybe able to tell or she may not. You might have done soothing or triggered something in her that she likes, what else can I tell you’. He added “You know life is very interesting, you never know what will happen at any given point in time, or the effect of something or someone in our lives. It is like Angelo”.

I asked “what Angelo, what do you mean”. He answered, “Angelo is the most beautiful person I know, he impacts people and no one knows how or why. Trying to explain it makes your head spin. Maybe in a way you are her Angelo”. This revelation was something I was not prepared to deal with, specially so early in the morning. I sank into my being, as if getting into a warm bath. It gave an intense feeling of wellbeing.

I looked at him and at her; both were glowing next to me in happiness. My heart was heavy and felt as if it was going to burst inside my chest. This intense feeling traveled through my body, pushing tears of joy from my eyes. I started to understand that I was only a vehicle for them to find a moment to express love, and that their love was the only important element here. I was witnessing first hand the expression of love in its purest form as it flowed from them unimpeded by any obstacle. I came to realize through this experience that love is the ultimate self-indulgence, and that it is all in the giving, because that is all that we feel.