It had been a long time coming, that I came to consider bringing my sheets and towels with me. I had postponed my decision because it seemed a bit extreme, and I was trying to rid myself from my fears and insecurities, that had grown inside my like wild weeds, throughout the years. Entering the hotel room, one that had housed me several times during the last decade, nothing had changed, except for the bedspread. I placed my carry-on bag on the bed, after folding the bedspread back. This allowed me to inspect the condition of the sheets. They were worn, but appeared to be clean. 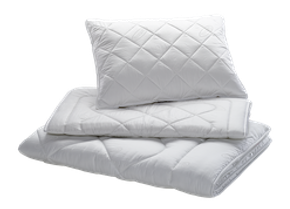 Opening the bag and removing and placing my toiletries was my second step. In the small bathroom, I took the opportunity to wash my face and hands after my long trip, and allowed me to inspect the state of the towel. I was a bit worn, but clean, and sufficiently thick to dry me. I was relieved finding these items in satisfactory condition, since they were going to brush my skin for the duration of my stay. I could not say the same about the bedspread. It was not the one I had seen on my previous stay, but I understand that most guests abuse them by placing their bags, purses and even shoes on them. Also, they do not seem to get the same washing schedule as the sheets, which are changed daily. 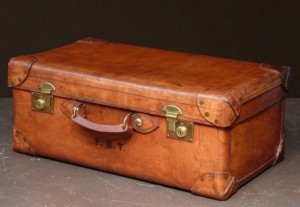 I left the small hotel in the highland town to go visit my clients. I was hoping that this would be my last business trip. These clients were very important to my firm, and I had been dispatched to troubleshoot for a junior colleague that had upset them. As I entered their office in the main square, they greeted me effusively. After the customary greetings, they took me out to lunch to the best restaurant in town. I was there to reassure them of the continuity of our service to their firm, and to apologize for the mishap of my colleague.

Business lunches usually start late, and if things go well, end late. It is a sign that agreement has been achieved. I walked back to the hotel at about eight. Night had fallen, and the cool mountain air was refreshing. Finally in my room, I removed the bedspread, as I ritually do, to replace it with the spare that most hotels provide in the closet. Usually, these blankets are clean and bagged to keep dust off them, guaranteeing the pristine status. Always hoping this item is clean and waiting for my use. I went to the closet, and pulled down the bagged blanket. Piercing one corner of the sealed bag to be able to smell its content. I appeared to be sufficiently clean. I spread it on the bed and made sure it would keep me warm during the night.

I undressed to my undergarments and went to wash-up to the bathroom. While brushing my teeth I inspected my work in laying the blanket, I was satisfied. Also, thought that in case of needing more cover, I would resort to the original bedspread, now folded neatly on the only chair in the room. Noticing the absence of heating, and the increasing cold in the room, I decided to lay the bedspread at the foot of the bed, just in case I needed it.

I got into bed, pulling the sheet and blanket to my neck, neatly folding the sheet over it, got into my usual fetal position to fall asleep. Turn down the lamp atop the night table and stated to listen carefully to the sounds of the night. The room was pitch black. I was happy that it would only be one night away from my bed. 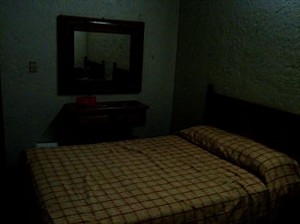 Not knowing if I was asleep, or still awake, I felt a soft caress on my arm, like velvet gloved hand sliding from my elbow to my hand. Abruptly, I pulled my arm, and placed it under the covers. Several hours later, I think, I started to feel restrained; parts of my body were immobilized. I could not move, or even feel one of my arms. It was trapped and was held between my legs. I explained this to myself, by assuring me that there was nothing wrong or out of the ordinary. Just as simple as, having fallen asleep over my arm, it had lost circulation, and I need to reanimate it, and then wait to pull it to safety once again. I tried to toss my body to the other side, noticing that my legs were as well in a bind. I could feel them, but somehow, I could not use the to turn myself around.

In the darkness, I started to worry; I could not move of free myself. I could rotate my feet and one wrist, but not much more. I tried to use brute force to free myself unsuccessfully. After this effort, I noticed that these bindings, extended thru my back and around my torso as well. This realization proceeded to put me in panic mode. I tried to see if anyone in the room was the culprit, and if so, what was their agenda. Was this a kidnapping?

I had to free myself. After trying several moves, I discovered that I could fold my legs to achieve a reduction of tension on the bindings on my torso. This could allow my arm to recover and be of some use. I achieve a slight twist of my waist, freeing the arm. Moments later a tingling sensation was auguring the return of blood to it, and also to its use. While I waited in panic, I mapped out my freedom strategy.

Firstly, I would use that useful arm to turn the lamp on the night table and assess the danger in which I was. But, wait, what if my captors discover my advances in freeing myself, would they correct their captivity, or even worse punish me for the attempt? I decided to work in silence and in the dark, until sure that I could defend myself, or escape unharmed.

While I waited for my arm to be operational, I could sense a variety of textures of materials used by my captors. Some where silky soft, others, rougher and or harsh on my skin. The thumb on my sleeping arm, started to respond to my command. Little by little, the rest of my fingers woke up; this reassured me in my quest for freedom. In my panic, I had forgotten the vivid quality of my dreams, was this one of them? It didn’t matter. I had to find out why I was captive.

Recovering my previously asleep, but freed arm, I press the switch of the lamp on the night table, without success, I pressed several times with producing the light I had hoped for. The panic increased, I was at their mercy, unable to escape. This had to be a dream, not a dream, a nightmare, I thought. I closed my eyes hoping to end it and wake up.

I remembered that the hotel would cut the electricity between four and five in the morning to save energy. Maybe this was the reason for the lamp no working. I had no idea what time it was, so I tried to press the switch several more times. It didn’t work for hours during my captivity. I don’t recall how long it took, until finally the lamp light up. 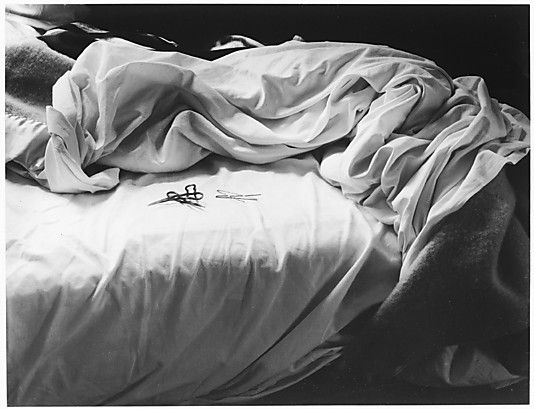 To my surprise, there was no one in the room, and the bindings used in my captivity, had been a combination of the sheets, the blanket and bedspread that had conspired to teach me a lesson in humility for underestimating their cleanliness.